We are more than your business consultant, we are your trusted ally... 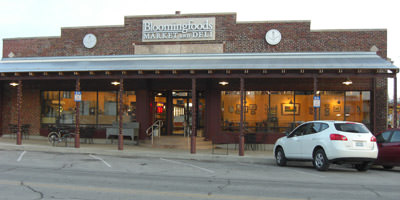 "The sales forecasting tools that Debbie has developed for us has not only given us the means to accurately predict sales for new store locations and store expansions, but has also helped us to develop a comprehensive real estate strategy for our brands. I have found Debbie's work to be very insightful and valuable to our company's store expansion program."
- Williams-Sonoma, Inc.
Arthur Tropp, Senior Vice President of Real Estate

"Debbie is one of the most capable site location analysts I have known in my 40-year career. Her experience with specialty store location research, site analysis and sales forecasting is both broad and deep. If I were a retailer looking to expand my business, Debbie is an analyst in whom I would have a high level of confidence."
- Pete Davis, Independent Consultant

"CDS is very fortunate to have found someone with Debbie's experience and skills. Expansion projects are becoming more and more complex, and co-ops need disciplined research to use for making decisions. The future is never certain, and so the more data is used as a basis for analysis, the more likely the results will be predicable and risk minimized."
- Marilyn Scholl, Manager, CDS Consulting Co-op

"Debbie's site visit was a watershed moment for our steering committee. She listened in depth to what we hoped to accomplish and provided not only a candid evaluation of our proposal but also options we had not considered. Her objective assessment enabled us to commit to decisions we had been deliberating for months. Ultimately, the market study she submitted to us became the centerpiece of our feasibility report. Her work was the catalyst for everything we accomplished to date. She made the nuts and bolts of cooperative development a sheer pleasure."
- Kathryn Strickland, Executive Director, LIFT Housing and Richard Hiatt, Executive Director, Food Bank of North Alabama

"Debbie’s study of our co-op’s trade area was thorough and informative. Her analysis of potential expansion sites was a key element in our decision-making. I would recommend Debbie for any food co-op seeking a scientific analysis of the environment in which it operates."
-Kari Bradley, General Manager, Hunger Mountain Co-op

"We are 3 quarters into our first year of operations and the market study we got from Debbie has proven to be spot on thus far. We also appreciate how professional and helpful Debbie has been both during and after the market study!
-Lori Burge, General Manager, New Orleans Food Co-op

“We quadrupled our store size, so banks were understandably concerned with the size of the leap we were taking. Debbie's market study included a clear statement of the site's sales potential assuming certain actions on our part. We won over the bank, followed her recommendations closely, and ended up achieving the sales she forecast...almost to the dollar!"
- Chris Dilley, General Manager, People's Food Co-op of Kalamazoo

“Our market study was absolutely integral to our relocation. It was the foundation that allowed us to create a vision. The raw data was the backbone of our financials. The professional report impressed the lenders. Debbie’s work was worth every penny."
- Margo O'Brien, General Manager, St. Peter Food Co-op

“Debbie is a highly skilled and knowledgeable market and trade area analyst. Her extensive work with co-ops provides apples to apples comparison data to help cooperative grocers understand and thrive in their trade areas. And, she is easy to work with and an excellent communicator.  The Customer Address Transaction (CAT) study she helped us conduct is invaluable to our marketing team. CAT data allows us to track changes to sales by census tract, and to identify and target market to census tracts where we see the opportunity to grow sales.”
- Eric Stromberg, General Manager, Davis Food Co-op

“Our market study with Debbie Suassuna was right on the money.  Even though we were expanding at the same location for our project, the study was invaluable in giving us confidence to go forward with our financial planning for the project knowing the expanded store would truly be able to support the costs involved.  We've just completed our first year in our expanded store and our sales were just beyond the study predictions.  The project has been a huge success and Debbie's study was key to making it possible for our co-op.”
- Jacqueline Hannah, General Manager, Common Ground Food Co-op

“Debbie's visit and consult helped us to gain comfort with the idea of a bigger than "typical" food co-op store. She helped me to pinpoint a location that would suit us well in our intensely competitive market. Debbie also helped us to understand what kinds of features a store would need to best compete in this market.”
- Dan Gillotte, General Manager, Wheatsville Food Co-op

"We conducted two market studies when we opened our second store.  One with Debbie at CDS Consulting Co-op and the other with a local Twin Cities firm.  Debbie's market study was by far the most accurate of the two.  Her ability to predict the sales potential for our new store, as well as its cannibalization on our existing store helped us with our financial planning. More recently we have used her services to help plan for new competitors entering the market.  We highly recommend her services." - Sean Doyle, General Manager, Seward Community Co-op